Assistant to the Directors

Jennifer Wolfenbarger joined the Pride of the Southland Band in the Fall of 2016.  Jennifer oversees all logistical and financial aspects of the band program.   She has been associated with the University of Tennessee since 2008.  Currently, Jennifer resides in Knoxville where she enjoys running in her spare time.

Lindsey Cupp Maples joined the Pride of the Southland staff in 2014 as Majorette Coordinator.  She is a graduate from the University of Tennessee with a Bachelor’s Degree in Child and Family Studies along with a minor in Communication Studies. In addition, she holds a Master’s degree in Early Childhood Education from Lincoln Memorial University.

Lindsey was a member of the Pride from 2004-2008, serving as Feature Twirler from 2004-2005 and Head Majorette from 2006-2008. Throughout Lindsey’s twirling career, she has held numerous competitive twirling titles. More recently, she has been an instructor at several high schools and choreographed routines for both majorette lines and individual twirlers.

Lindsey is currently a school teacher in Knox County and has a passion for children.  Lindsey, her two children, and her husband Derek, live in Knoxville. 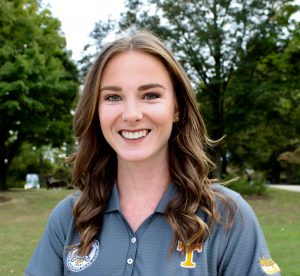 Laura Williams has been a part of the Pride of the Southland staff since 2015 as Color Guard Coordinator. She is a graduate of The University of Tennessee with a Bachelor’s Degree in Psychology and a minor in Applied Music. She also holds an Elementary Education Licensure from Maryville College.

Laura marched with the Pride of the Southland Color Guard from 2011 to 2014, serving as a squad leader in 2013 and Head Squad Leader in 2014. She has volunteered with several high school guards and drum majors and has planned and lead color guard and leadership clinics.

Laura is currently a second grade teacher in Knox County and enjoys crafting, playing bassoon, and traveling in her spare time. She and her husband, Jacob, cat, Nate, and dog, Herbert, live in Knoxville, Tennessee.

Majorettes of all ages!! We are planning to host the 57th Annual UT Twirling Camp on June 18-21. The registration is now LIVE! Go to our website to register: Athletic Bands > Majorettes > Twirling Camp. The deadline is June 1 to register, but there is an “early bird special” for those who register before May 16.

High School Seniors: We still want you in the band program at UT!!  It’s not too late to submit a video audition for the Pride.  A link can be found under Prospective Students > Auditions or contact us at 865-974-5031 or utband@utk.edu.